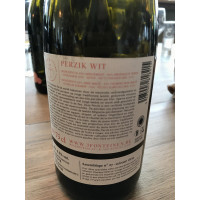 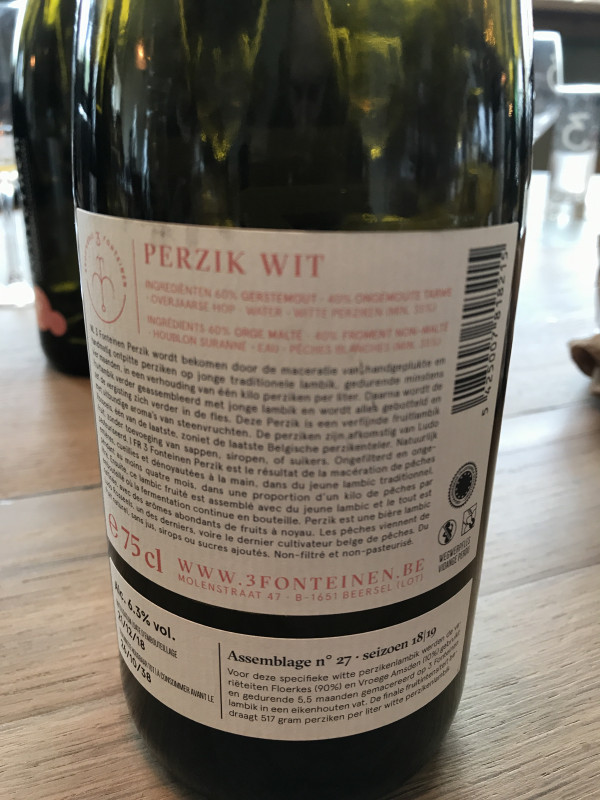 Amazing. Where 24 was soft, sweet and juicy, this one is dry, tart and woody, but with the same mad fruit intensity. Tons of peach, very concentrated, with only a light acidity. I love it.

One of no less than four (!) new peach lambics released by 3 Fonteinen during their open days last weekend, some of them even sold as part of any number of packs; this one was made with white peaches only, of the Vroege Amsden and Floerkes varieties. Already ‘prepared’ in the ‘Twists of Fate’ project, expectations for these new peach lambics were high. Snow white, mousy, open ring for a head, deep peach (sic) blonde beer with bright yellow-golden glow. Aroma of indeed sweet ripe peaches but also dried peaches, damp hay, mango chutney, lemon rind, urine-like Brett effect but in an elegant way like only lambic can have. Crisp, sour onset, dry from the start, lemony, but lots of both ripe and dried peach flavour as well, medium carbonated, rounded bready malt and wheat base dried by intense fruitiness; funky and grassy, hayish aspects add depth in the finish, tannic effects from wood (and probably peach peel) are obvious enough as well. Ends with a complex, long-stretched fruity and – to a lesser extent – lactic sourness, very refreshing. Having had several of the peach versions among the ‘Spelingen’, some of which were absolutely mind-blowingly beautiful, this one certainly did not disappoint.

Tried from Bottle on 07 Sep 2019 at 14:05
Next
We use cookies to give you the best online experience. By continuing to browse the site you are agreeing to our use of cookies.