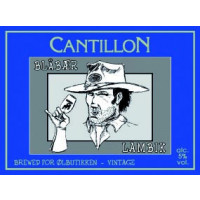 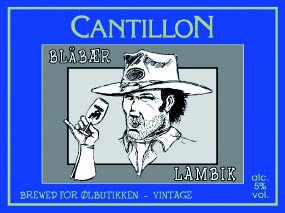 Lambic Style - Fruit Regular
Cantillon Blåbær Lambik a lambic with bilberries added and produced for Ølbutikken in Copehagen, Denmark. It is produced in very limited quantities and is generally released sometime during the summer. It is released in both 37,5cl and 75cl bottles and is 5% ABV. Blåbær Lambik was first released in 2005 and has been released every year since then except 2006, and 2008. Though the word blåbær translates in English to blueberry, the fruit used in this lambic is the European bilberry which is very similar to the American blueberry. The fruiting process for this lambic consists of putting fresh bilberries directly into the barrel with the lambic. Source : Lambic.info
Sign up to add a tick or review

Thanks to Joey for bringing this to the LCBS 10. The pour was ruby red with barnyard aromas. This beer was smooth and not overly sour with tart blueberries and sour cherries dominating the scene. A great beer.....
2009 batch II, 750ml re-rate courtesy of destructo. Even better than I remembered it......
re-rate Batch 7, 750 ml shared at Mikkelller’s Bar in Copenhagen. So smooth.

Deep reddish with a decent pink head. Glue and some light berry. Light soured berry notes and some more of the white glue. I don’t get any of the flavours I should.

EB from last Saturday. Plenty of bilberries and a hint of filmjölk. Good, if a hint one note. Should be interesting to see what happens with it with time.

Less fruit in the nose, taste is fairly similar to 2020

Very berry forward in the nose. Dry and mellow without much fruit

When Jeppe-Jarnit Bergsø, brother of Mikkeller founder Mikkel Borg Bergsø and himself later the brewer of Evil Twin, opened the Ølbutikken beer shop in Copenhagen fifteen years ago, he probably hardly realised that he and his brother more or less started a revolution in Europe: the craft beer revolution came from America to Europe first through Denmark, though of course important changes in beer culture had been going on for many years before that in the United Kingdom and Belgium as well, and Norway already had its great pioneer Nøgne Ø since 2002. Yet, the pioneering role of Denmark’s capital in bringing American style ‘postmodern’ craft brewing to Europe can hardly be overestimated, and Ølbutikken was a pioneer among pioneers. Among the beers Ølbutikken commissioned for sale at the shop only was this blueberry lambic by Cantillon: Ølbutikken delivered the blueberries to the brewery in Anderlecht, and there it was steeped in lambic in the same way as lambic brewers already traditionally did with cherries or raspberries. As much as we now, fifteen years later, take this kind of thing for granted, back in 2005 this was anything but self-evident (even though Cantillon was already one of the most progressive lambic producers back then also with less evident fruit species); so the result, simply called Blåbaer (‘blueberry’ in Danish), was an important and influential beer, that helped to spark the renewed interest in not just Cantillon’s oeuvre, but traditional lambic in general. Since 2005, Cantillon has been producing this Blåbaer (almost) every year in limited quantities, even after Ølbutikken closed its doors – Himmeriget took over the commissioning of Blåbaer from there – and it has become one of those iconic whales that are being traded for often hundreds of euros on the second-hand market. I have been reading about it for fifteen years – and tried to obtain a bottle a few times without success – but only now I found myself in the opportunity to finally taste it, as Cantillon is now selling bottles in their taproom in Brussels. Had it from a 75 cl bottle, 2019 vintage. Densely mousy, medium thick but opening, pale lilac-tinged off-white head on a hazy, beautifully purple beer with carmine red tinge. Aroma of indeed obvious blueberry, as in actual blueberry juice as well as clear blueberry skins, also cooked blackberries, stewed rhubarb, very dry red wine, lemon juice, background impressions of damp cellar, wet old wood, rosehip tea, sweat. Very fruity onset, juicy sweetish and spicy blueberries galore, but in a slender, elegant way, tart but relatively mildly so, with lots of minerally effects on the sides, adding crispness and further elegance; soft bready ‘soil’ under ongoing blueberry juiciness and fleshiness, with a soft blueberry skin astringency towards the end, where light woody and funky-Bretty notes show up as well, though the soft sourness and fruitiness of the berries remains the dominant factor all the way through, with this ongoing minerally undertone accompanying it. Great fruit lambic as expected, and even if this may not be the most overwhelming Cantillon lambic I had to date (implying that its high ratings everywhere have a lot to do with its sheer rarity as well), I very much enjoyed it because of its elegance, subtlety and balance – apart from, of course, the feeling that I just ticked another famous bucket list beer, which admittedly adds to the experience. I would, however, not go out of my way to obtain a second-hand bottle for hundreds of euros either (even if I am still very curious about earlier vintages), but there is no denying that this is a beautiful beer that allows the blueberries (or, more accurately in the English language perhaps, 'billberries') to shine beautifully - connecting with Denmark's traditional affinities with this and other kinds of forest fruit. Nordic-themed lambic the way it was intended.

Pours dark red. Small pink head. Scent is extremely intense, Berry. Fruitskins, bit peppery almost. Taste is full, salty touch almost. Fruitskins, much more fruit than I remember the version I had to be ( 13 or 14). Nice beer, but not amongst the best of this brewery, even if it's rated as such.

Backlog from the good 'ol days...

Tried on 03 Sep 2020 at 14:55
Next
We use cookies to give you the best online experience. By continuing to browse the site you are agreeing to our use of cookies.