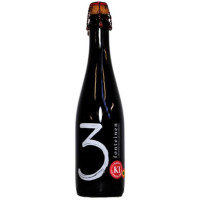 Lambic Style - Kriek Regular
3 Fonteinen (Oude) Kriekenlambik is the result of macerating hand-picked whole sour cherries on young lambic for at least four months, in a proportion of one kilogram of fruit per litre of lambic (and possibly blended with some more young lambic). Fruit intensity ranges from minimum 35% to 50%. Aside some selected bars (e.g. 20th Anniversary of Akkurat in Stockholm, Sweden), this sour cherry lambic is available at given times in the lambik-O-droom.
Sign up to add a tick or review

Pours a beautifull, particularly dark red. Small formation of 'foam' thats pinkwhite. Intense , room-filling aroma of wet cherries. Intense red-level of intensity, almost ( though I haven't put them side to side) . Taste is medium acidic, you can tell it's actually higher by the finish, but the cherries are so intense (still, 5 years after botteling) that it gets more countered than you'd give it credit for when you're simply drinking this, rather than picking it appart. Bit one dimentional, very cherry forward, than again that might be the idea of this beer though. Not as flat as I would have thought, I'd say medium low to medium carbonation - whereas most Geuzes of cherry beers can go rather high, so it's still lower obviously.

From cask at Moeder Lambic Fontainas. Beautiful rich red/pinky purple colour with a massive pink frothy head of tiny bubbles which disappears slowly. Aroma is big cherries, bit of lavender slightly funkiness and a bit sweet too. Taste is slight cherry sourness initially and then mellowing into big fruitiness. Low carbonation but tingly on the tongue. Light bodied but very drinkable. This is a very special beer.

Small glass, restaurant Drie Fonteinen Beersel. Cherry liquor aroma. Sweet and flat. Full cherry flavor with cherry pits and bitter almonds. Full bodied. A bit alcoholic. The essence of cherries packed in a glass. Absolutely great beer! Wished I could have more, but I had to drive.

Tried from Bottle on 14 Mar 2019 at 22:26
Next
We use cookies to give you the best online experience. By continuing to browse the site you are agreeing to our use of cookies.