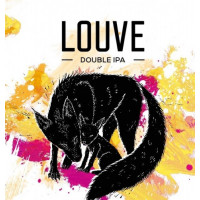 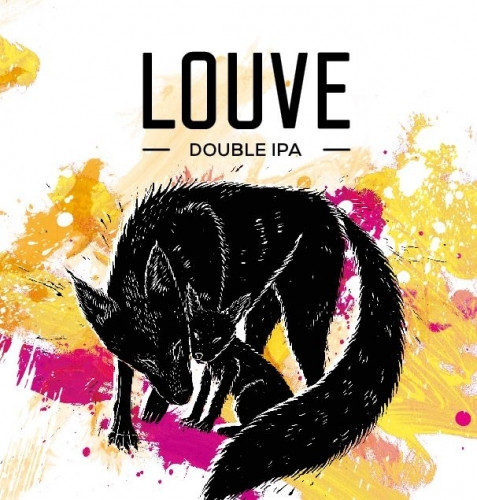 Medium if stable white head over orangejuice coloured beer ( décidément! ). Asafoetida, ureum in high concentration, banana(peel) and something as leeks or even onion. Soft bitterness, lots of fruity esters. Bitterness retuns with every sip, only to retreat everytime. Gets then sweeter, fruitier. Hops are not very obvious. Again one softened with the oats. Better carbonated than it looks. Oilslick/hopoils. Decent, not stellar, the nose has a strange off-smell. Having said that, the average of La Source is, well, above average.

Hazy DIPA with spelt and three very familiar hop varieties: the new generation German variety Hallertau Blanc in combination with New World stars Simcoe and Citra. Comes from a can with a sticker bearing nice artwork depicting a she-wolf and her cub. Tightly but irregularly paper-lacing, medium thick, yellowish egg-white, opening head on a completely cloudy, if not murky, pale straw blonde beer with apricot tinge and 'milky' edges. Aroma of fresh pomelo, lemon zest, blood orange flesh, halfripe pineapple, dough, curcuma powder, fresh lemonbalm leaves, Sichuan pepper, unripe mango, marijuana, biscuit crumbs, yellow kiwi, lilies. Juicy, fruity onset, sweetish but not overly so, hinting at raw pineapple, rambutan and papaja with a very citric edge (lime zest, pomelo), quite refreshing yet softly carbonated; very soft, fluffy, doughy, eventually powdery mouthfeel, full and very easily drinkable (dangerously so even, seen its ABV). Very doughy maltiness, again refraining from overt sweetness, remains completely soaked in citric and not-too-sweet tropical fruitiness from the hops, with a hard, unripe apricot aspect added in the finish as well; utterly refreshing, brightly citrusy but not becoming too dank or even sweet-tropical anywhere, instead the finish brings a powdery, peppery, drying, spicy (even marijuana-like) bitterness, not harshly so but still a tad more developed than average for a hazy IPA, with a gin-like alcohol aspect sitting at the tail and making itself noticeable only briefly and gently. I remember arguing that this La Source project was a promising one when their first beer (Epervier IPA) came out, but this one, only their second beer for me personally, exceeds my expectations. This is as contemporary and 'hip' as it gets, as if made by some new English, Scandinavian or Dutch craft brewer - the postmodern American craft beer idiom to the fullest. Double NEIPAs - or NEIPAs in general - are not my personal favorite in terms of style, but there is no denying that this one is very well executed, without shortcuts and apparently following the New England process and features in detail. There is nothing traditionally Belgian about this anymore: this brewery is clearly ready to specialize in the global craft beer style and nothing else, and there certainly is enough room for that in this country - heck, if it were for me, every town in Belgium would have a modern craft brewer like this, even if it is no coincidence that La Source is situated in metropolitan Brussels, of course (as the first 'US style' craft beer hot spots are usually the capitals, see also London, Madrid, Paris, Berlin, Moscow and so on).

Tried from Can on 10 Mar 2020 at 19:31
Next
We use cookies to give you the best online experience. By continuing to browse the site you are agreeing to our use of cookies.