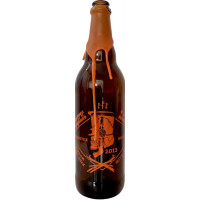 Tap @ CBC. Pours pitch black with a brown head. Booming aroma of marshmallow, toffee, dark chocolate, sweet cherries and dark sweet fruits. Lots of vanilla. Taste of bourbon, vanilla, marshmallow, chocolate fudge, toffee and sweet fruits. Quite a booming beer. As Phredrik stated it: "If this beer was a woman, it’d be Pamela Anderson. You’d taste her once or twice, but you wouldn’t bring her to dinner with your family."

Massing thanks to Compton25! Obtained in a trade. This one has been an absolute top want of mine since I got into beer, I managed (or thanks to the kindness of others I manged) to try almost every dream beer since then. This one kept eluding & I am the only one since basically almost everyone but seem to have tried this one. I have had several version of Dark Lord since then including the bourbon one in 2013 (perfection) & in 2015 or so, disappointment (too soy sauce / messy). I realize that people hate on these beers, I adored many BA version, I actually thought that the regular one was fair way back in 2012 but apparently it has been going downhill ever since or that is just perception. Anyway sparkling green wax, waxing is so old school now, modern Dark Lord special label. Pours black, head is amazing very deep, deepest coffee but sadly doesn’t last. No head very quickly. Nose is old school RIS syrup, pure molasses, treacle, syrup, so sweet thick syrupy with bourbon, candlewax vanilla mixed in, maple, insanely sweet molasses RIS syrup. Taste is chocolate desert pudding molasses, felts crazy strong pure sugar, maple, treacle, dark honey, bourbon concentrate syrup sugar, candy, butterscotch, unbelievably thick, syrupy & sweet,… Vanilla is not as big as hoped. Pure syrup, soft carbonation. Once you get into some ultra-sweet coffee in the back, melted chocolate. Pure insane sweet syrup, this kids is how rare special BA stouts used to taste like, even sweeter. Crazy sweet but tasty brew, pure candy syrup and sugar. Worked great with Thai food, it could bear the spices, strong flavours etc. Fight fire with fire.

Sampled at Mikkeller Beer Celebration Copenhagen 2017. 2016 vintage. Pitch black pour with a small tan head. Notes of vanilla, dark chocolate, milk chocolate, light roast, sugar. A bit too sweet. --- Beer merged from original tick of Bourbon Barrel Aged Dark Lord with Vanilla Beans on 18 Jun 2017 at 14:36 - Score: 8. Original review text: The biggest disappointment for me, at MBCC. Damn, was this sweet... I was expecting a near 5/5.

Tried on 21 May 2017 at 12:02
Next
We use cookies to give you the best online experience. By continuing to browse the site you are agreeing to our use of cookies.