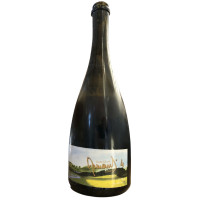 The summer version in this highly coveted series of ‘seasonal geuzes’ by 3 Fonteinen’s Armand Debelder, one of the last to contain lambic brewed by Debelder himself before the ‘thermostat incident’ that put an end to brewing. I never had this version when it was released as a one-off back in 2011 and it has become increasingly difficult (and expensive) to find them as vintage bottles, so I was ecstatic to learn that Lambik-o-Droom is now selling a remainder of these ten year old vintage bottles for on-site consumption. Dusty bottle – complete with cobwebs and even a shriveled dead spider on it – without label, but I will assume that the guy who served it, picked the right one from their stock. Thick, dense, off-white, thickly plaster-like lacing, very stable head remaining closed for a very long time, on a misty deep ‘honeyish’ orange blonde beer with amber tinge, turning darker as the bottle gets emptied – and showing a lively swirl of sparkling, so apparently carbon dioxide levels have not suffered from ten years of storage, on the contrary. Utterly refined, delicate bouquet: a lot of medium dry sherry from oxidation, but matching remarkably well with the ‘original’ lambic features which are largely intact, though in a softened way; impressions, apart from that old sherry effect, include old wet wood, dried apricot, roses, dried thyme, old straw, dusty cellar, mandarin peel, hints of grass silage, purple gooseberry, very old dry white wine. Fruity onset, very lively and convincingly so even, with a lot of old wrinkled apple, dried apricot, gooseberry and yellow-green plum, bathing in a finely tingling carbonation effect lifting up the flavours rather than interfering with them, thanks to all these minute bubbles; a sweetish peachy core is there too, but soft tartness prevails. Soft, almost velvety mouthfeel, soft bread-crusty, fluffy malt core gently dried by lactic tartness, wet-woody tannins and strong ‘old sherry’ oxidation, while all the estery complexity, refreshing apple and gooseberry sourness and, eventually, moldy orange-like Bretty funkiness add further layers of flavour. This whole flavour structure remains remarkably soft, elegant and even juicy, a bit orange-like even in the end, while a thyme- and dried lemon peel-like, earthy, ‘deep’ bitterness closes things off in a most delicate way. I unfortunately missed this one when it was young, but this bottle is clearly ‘graced with age’, having matured perfectly with a layer of old sherry that matches the rest of the flavours, which have remained lively and intricate as ever. An absolutely beautiful, very ‘malse’ geuze – compared with a strongly oxidized and therefore rather disappointing bottle of Horal Mega Blend of the same age that I got a sample from later the same day, it is clear that this Armand’4 series is a very powerful one, one which can stand the test of time like only the greatest geuzes can. Bafflingly beautiful and sophisticated.

Wineglass showing pale amber with half a finger of clean white foam. The nose shows subtle notes of brett, hay, and grass. The palate is well carbonated and light bodied. Moderately tart with light flavors of brett and biscuit.

Bottle. Amber color. Lemon, oak, honey and gooseberries in the aroma. Close to perfection. Lemon and oak in the flavor. Considerable dry out effect. Raspberry and gooseberry asters. Hint of leather. Very complex geuze with an unbeatable aroma.

Tried from Bottle on 26 Aug 2019 at 12:06
Next
We use cookies to give you the best online experience. By continuing to browse the site you are agreeing to our use of cookies.