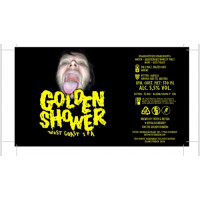 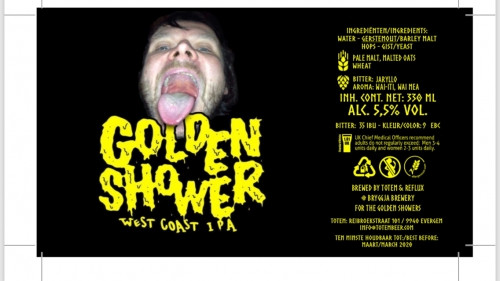 IPA Regular
Sign up to add a tick or review

5 July 2019. At Dok Brewing Festival. Cheers to Anke & Ghent beer crew! As 'Golden Shower / Gullsturtu'. Clear golden with a lasting, thin, frothy, white head. Aroma of apple, pear, pineapple, yeast, green banana, honey. Taste is light fruity sweet, restrained apple & pear with more 'tropical' pineapple & peach, bready, yeasty & honeyish base supporting bitter spices, grass & bitter stonefruit. Dryish, grassy hoppy finish, a bit floral, yeasty, more ripe yellow fruit. Didn't come across as intense, neither in aroma nor in taste, although it's still highly drinkable of course. But my expectations from Totem are always high (their own fault of course!) so this is one of the least memorable brews up till now.

New Totem beer, an APA hopped with Pacific hops so essentially a New Zealand pale ale, though I do not per se agree with its qualification as a beer style independent from APA. Launched during the (last) Copacobana Festival in Ghent. My rating here is completely provisional, because I did not take notes and am waiting for the second batch, which will soon replace this first one, which - according to the brewer - has some imperfections (it apparently got a bit oxidized). Creamy, papery lacing, stable, snow white head, hazy peach blonde robe with vaguely brownish tinge (the oxidation indeed). Not much oxidation in the aroma, though, coming across as very fresh, with notes of mandarin, yellow kiwi, melting butter, dough, lychee. Fruity onset, sweetish with tropical lychee and yellow kiwi aspects, medium carb, very smooth and even somewhat creamy mouthfeel, nice cereally and lightly bready malt body, slick and soft, soaked in delicately aromatic hoppiness, lychee, mango and orange, adding a light powdery bitterness to the finish. Very elegant and extremely thirst-quenching beer - which was far from a luxury on a searing hot summer day - in which the mild oxidation did not bother me one bit, but it takes a great brewer to admit even the tiniest flaw and wanting to replace it by another batch because of it. I will, however, certainly rerate this when I come across that second batch and replace my current rating here by an updated one, if only respect this genius brewer's intent.


Tried from Draft on 28 Jun 2019 at 22:04
We use cookies to give you the best online experience. By continuing to browse the site you are agreeing to our use of cookies.