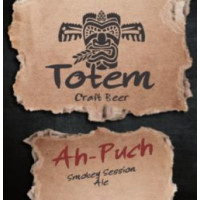 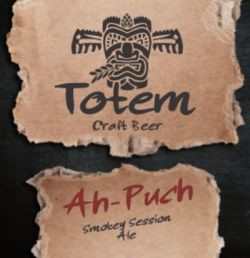 Brewed at/by: Bryggja
Smoked / Rauch Beer Regular Out of Production
Sign up to add a tick or review

29/09/2017 @home - 33cl bottle from a trade with tderoeck. Clear golden with medium pearly head. Nose and taste is fleshy smoke, some lemon, grainy. A bit thin. Not the best Totem beer but still is nice because of the smoke. Nice how Totem keeps on launching things like this.

Modern session beer using smoked malts, another new Totem creation, steini bottle with the typical slick, Aztec-themed Totem label. Regularly shaped, snow white, creamy, medium sized, very stable head, densely moussy on the edge and slowly dissipating in the middle, over an initially near-clear, warm ’old gold’ coloured beer with vague orangey hue. Aroma of smoked apricots, smoked turkey even, bitter dandelion juice, grapefruit peel, gari, hay, chicken spices, unsmoked cigarette tobacco, fresh seaweed salad, sweaty leather, salted lemons somewhere, green peppercorns, unripe tomato, capers, olive oil - everything is drenched in smokiness, but there is a hoppy ’dankness’ going on underneath. Clean, smooth onset, very low in sweetness, some basic sourishness of unripe tomato and dito cucumber alongside a subtle but very noticeable umami hint of green olives - flavour inherently linked to an overall umami smokiness, which strecthes till the very finish, over a smooth, slick, cereally, very lightly caramelized malt body towards a dry finish, further accentuating the smoky aspect but showing a considerable amount of expressive ’new’ hoppiness as well, with dried grapefruit and wormwood bitterness mixing nicely with the ’meaty’ smoky aspect. Bitter and umami rule here, a combination not all too often seen, but in a very elegant way, extremely well-crafted from a purely technical point of view - as usual with this brewery. Sessionable indeed but merely in terms of alcohol: this is among the most flavour-packed Belgian beers I’ve encountered so far below the 5% ABV limit. Another success as far as I’m concerned, I wish many more breweries in this country would follow Klaas’ example at departing completely from the old clichés; beers like this are innovative even within an international perspective, which I consider a great achievement coming from a small Belgian company.

At Zythos 2017. Pours cloudy pale amber. Aroma is sausage, smoked, salty, Body is light and rather watery, light smoke, but not much else. A let down after the rather good nose. Palate stays watery.

Tried on 05 Apr 2017 at 12:25
Next
We use cookies to give you the best online experience. By continuing to browse the site you are agreeing to our use of cookies.