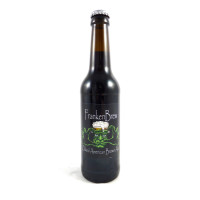 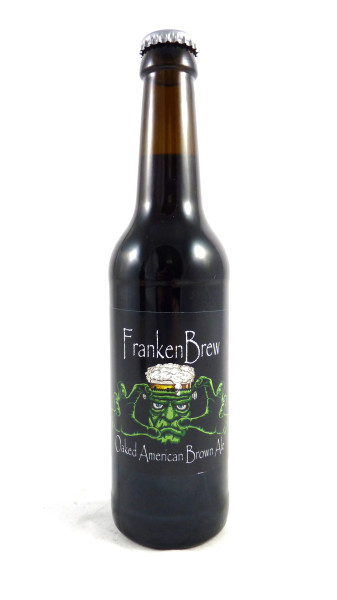 Brown Ale - American Rotating
Just as Victor Frankensteins creation, this beer was made out of curiosity and the urge to make something “beautiful” with the means at hand.

To test our new brew kettle we used malt leftovers from older brews. With no actual recipe we started milling the malts and we ended up with this “creature”.
It became an American brown ale with malty notes and a hoppy finish. To give it a little extra we lagered it on medium toast oak chips, soaked in white rum.
What you are holding in your hand is a unique creature, brewed for your enjoyment. It proves impulsive creations can become beautiful if you give them a chance.
Sign up to add a tick or review

Malcroys' next creation, an American style brown ale, but with a twist, in the form of lagering on rum-soaked oak chips; as the description above reads, cobbled together from leftovers, hence the name. Only for sale at the microbrewery itself in Kontich near Antwerp (also The Beer Shop, an eclectic online shop) and - I assume - very limitedly so; so thanks to Kevin, the brewer, for this bottle, very much appreciated! Thick and frothy, thickly plaster-like lacing, pillowy, small-bubbled, very stable, yellowish-tinged beige head; initially practically clear, deep chestnut brown robe with bright vermillion red glow. Aroma of caramel candy, 'macarons', ground almonds, dried coconut flakes, sourish blackberry accent, sweet-aromatic white rum indeed and rum-soaked yellow raisins, cocoa powder, hints of dried orange peel, melon, old madera, fig compote, stewed pear. Sweetish onset with fruity accents (dried fig, raisin, touch blue plum and even a vague ripe blackberry hint, but all restrained), sourish edge, softly carbonated (bit too soft perhaps for this style), with a very soft, almost 'fluffy' mouthfeel; lovely toffeeish and pecan-nutty maltiness with a slight toasty-bitter edge, but that typical brown ale 'cocoa' or caramel sweetness prevails, in a subtle enough way. The initial sourishness builds up a bit in the end, but not to the point where it becomes out of place in the intended style; a slight tannic woody accent is certainly there but subtly so, while the white rum adds a dried coconut flesh-, nougat- and almond-like aromatic quality retronasally. Lingering cocoa powder, toffee and coconut impressions in the finish, along with a spicy hop bitter layer, merging with the toasty bitter aspect from the malts; a citrus peel-like aspect from the hops does appear but in a sedate, 'dried' and subdued kind of way. The rum-soaked oak chips have more effect here than the hops, but the spiciness of the latter still more or less justifies the 'American' part in 'American brown ale'; more importantly, however, this is first and foremost a true brown ale in the traditional Anglo-Saxon sense of the word, and not just generically 'a brown coloured ale' as it is often misinterpreted in Belgium. It's the malts, in all their soft and sweet nuttiness, caramelliness and cocoa-like flavours that stay in charge here, and that should be the essence of a true brown ale, whether English or American style. Brown ale in general is a genre not often performed here in Belgium - if at all, now that I come to think of it - and a genre not even popular anymore in present-day craft brewing, with the heydays of American brown ale being long past us, dating back to a time when U.S. craft brewers were still cautiously investigating what 'remakes' of old European styles would commercially work and which ones would not; as far as I am concerned, there cannot be enough of them. Fits the description, even if the 'American' implies an even more firm and citrusy hoppiness, and what is more, it is the third interesting experiment by this enthusiastic microbrewery in a row - Malcroys clearly is one of those hidden gems in present-day Belgium that deserves more exposure.

Tried from Can on 23 Mar 2020 at 21:52
We use cookies to give you the best online experience. By continuing to browse the site you are agreeing to our use of cookies.