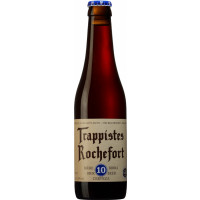 Belgian Style - Quadrupel / Dark Strong Regular Out of Production
Bottle: Unfiltered In 1952, in order to place the modernisation of the brewery on the right commercial footing, much care was taken with the launch of Rochefort's two new beers. The refectory beer had been the basis for the development of the ‘Middel’ (also known as ‘Merveille’) which became the Rochefort 6. The 10, however, needed something else to elevate it: candy sugar, steeped in the wort in metal baskets, quite an innovation in those days. Furthermore, two malts were used in the brewing process: pils and caramel malt, as well as wheat starch, two varieties of hops and Rochefort’s own yeast. The result was the powerful Rochefort 10, a beer sure to warm your heart with its robust dose of alcohol.
Sign up to add a tick or review

Tried on 04 Sep 2015 at 15:24
We use cookies to give you the best online experience. By continuing to browse the site you are agreeing to our use of cookies.