pours clear blonde . Small white head fades fast. Scent is fairly mild. hints of its tart base, but not so much of its fruit. Taste is fairly light. Medium tartness (lactic) bit unfresh though. Fruits don't really work with the beer for me. Bit 'sweaty' almost (but not in the way I usually mean that ) .. Have had far better from Totem. 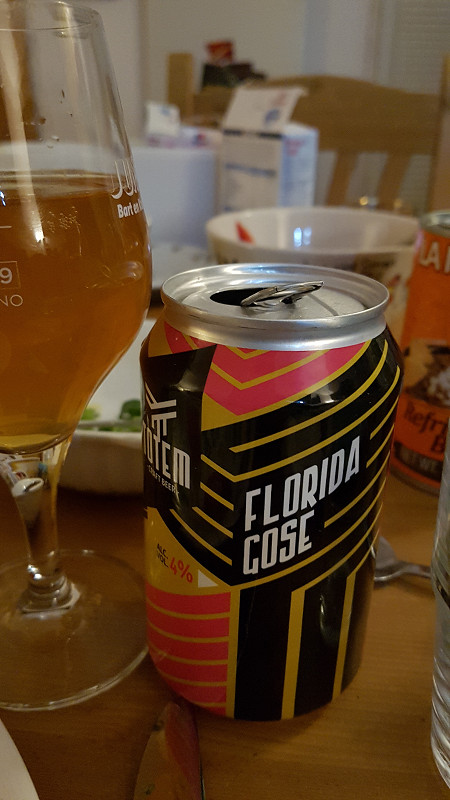 Can from Geers. Orange colour, white foam. Sweet nose of oranges, very juicy and fruit, medium sweet, some tartness in the finish. Not a lot of alcohol detectable but still full of taste. More lemonade than beer.

New canned Totem beer, a play on the Florida Weisse theme which they already explored during their more ‘experimental’ phase as a gypsy brewer, but now with a pinch of salt added. Thanks to Klaas, the brewer, for the can! Snow white, medium thick, mousy, gradually opening head on a misty orange-veiled peach blonde beer. Aroma of indeed blood orange pungently piercing through a ‘cloud’ of ripe peach, apple peel, melon, mandarin, sourdough, salty raw ‘moules parquées’ touch, rainwater. Utterly fruity-juicy onset as it ought to be in a ‘Florida’-themed kettle sour, lots of peach, watermelon and pear note with this blood orange addition again piercing through colourfully and refreshingly, medium carbonated, with a very slight salty touch on the edges and mild, lime-like lactic sourness throughout – but remaining mild and thin till the end. Slender wheaty-bready malt core soaked in fruitiness but the blood orange never gets too dominant – instead, it makes a somewhat ‘diluted’ impression, as if water (or melting ice cubes) were added to it, in a sense; still the finish manages to produce enough citrusy ‘fraîcheur’ to keep things satisfying and pleasant, while a chalky accent appears. Elegant, utterly light-footed as was the intention, refreshing: this is a beverage one can drink all afternoon in summer. Not very ‘beery’ but I guess that is never the intention in a Florida Weisse anyway – or indeed a Florida Gose… Different from its predecessor, but well done all the same.

Tried from Can on 11 Jul 2020 at 19:40
We use cookies to give you the best online experience. By continuing to browse the site you are agreeing to our use of cookies.