Lambic Style - Fruit Special
For this Druif, we used Dornfelder grapes from Wijndomein Hoenshof in Hoepertingen, Haspengouw region, Flanders. Dornfelder is a dark-skinned variety, originally from Germany. We co-fermented lambic with freshly-pressed-shortly-skin-macerated Dornfelder grape juice in an oak foeder. We let it sit for four months and blended the grape lambic with some fresh lambic wort for the “prise de mousse” in the bottle. The final fruit intensity is 51,7% of grape juice per litre of Druif Dornfelder. 100% 3 fonteinen.
Sign up to add a tick or review

Like so many of 3 Fonteinen's fruit lambic releases in the past years, this grape lambic, using the German grape variety Dornfelder (developed in the Württemberg region in 1955) grown by Hoenshof in Belgium, arose from preliminary experiments in the ongoing "Twists of Fate" series, in which the new generation of 3 Fonteinen 'tests' all the possibilities they can think of. I had all three preparatory Dornfelder Twists at Lambik-O-Droom: one made with whole grapes, another with grape juice including the skins (parallel to the production of red wine) and yet another with grape juice without the skins (parallel to the production of white wine), and apparently the second of these was judged to give the best result; so this final, 'official' Dornfelder lambic was made with skin-macerated grape juice, just like the Twist of Fate numbered X.v.. This final, 'finetuned' version of this X.v. boast even more alcohol than its predecessor, at a - for fruit lambic - quite formidable 9% ABV, due to the grape juice having added lots of extra sugars to ferment (note that 3 Fonteinen specifies that the final "fruit intensity" is no less than 51.7%). Bottled in October so now five months ago, I admit that I am probably drinking this a bit too young, but then most fruit lambics thrive at a younger age when they are still juicy and vibrant, and I have full confidence that the result will leave nothing to be desired. Tiny-bubbled, densely mousy, beautifully pale lilac-hued head, slowly dissipating after pouring but stabilizing as a firm, medium thick ring around the edge of the glass (the "prise de mousse" has been successful indeed), eventually slowly dissolving over an initially clear, very dark purple beer with ruby red glow, elegantly and slowly turning misty as emptying of the bottle progresses. The aroma slowly unfolds - a beverage like this takes its time to fully open and rewards those who have the patience (and experience): the obvious full and 'dark' grapeyness and supple, deep red wine effect of the Dornfelder juice upfront including its typical associations with ripe blackberries, blue plums and sour cherries, flanked by grape skin and grape seed oil, and overlying a funky lambic character reminiscent of grass silage, old books, dry worn-out oak wood, leather, dandelion leaves, violets (the fermented grapes again I think), some faint Bretty 'horseblanket', even a very light smoky touch in the background or something chewing tobacco-like - but red wine dominates throughout. In the mouth, the story becomes a bit more complex, with again all that dark fruit upfront, a thick fleshiness of deep ripe grapes without going into actual sweetness, blackberries soaked in a full and rounded red wine, grape skin astringency at the edges but nowhere harshly so, refinedly carbonated like a lambrusco, feeling vinous and very full, even creamy - also thanks to the ABV in this case; a supple breadiness shoring up a heavy red wine character dominates the middle, with the lambic features piercing through here and there, mostly in the form of a sour-yoghurty lactic acidity backbone bringing dryness but no harshness (even a certain 'milkiness'). The finish is a 'grand finale' showing off the complexity of both lambic and red wine: lots and lots of continuing 'vinification' effects reminiscent of a full, fleshy, purple-red Dornfelder wine, light minerality, retronasal funky accents from Brett, tannic dryness from wood and grape skins, a very vague supporting 'old hop' bitterness almost indistinguishable from the tannic effects - and a warming afterglow of sherry-like alcohol, accentuating the sheer vinosity of this drink and carrying all these flavours onwards and downwards over a long stretch of time. It has been quite an adventure tasting the Twists of Fate that precede this grape lambic and it commands admiration that 3 Fonteinen is so willing to offer their customers so much insight in their creative process; it also commands admiration that they are so dedicated to using local and 'honest' products, because all the grapes that went in here, were grown in Belgium, at about sixty miles east of the brewery (and in fact it has just been announced that 3 Fonteinen has earned an official certification as an organic brewery now - I could not have found a better moment to open this bottle, I suppose). But I digress: even though at the time of tasting the Dornfelder Twists side by side I rated the 'juice version' without the skins a little bit higher, this final result convinces me that the 3 Fonteinen team made the right choice by leaving in the skins; this "Druif: Dornfelder" (as it is officially called) surpasses its three predecessors in maturity and nobility, this is less grape lambic 'tout court' and more beer-wine hybrid, with the juice having fermented in such a way that the effects run parallel with red wine. The overall impression is almost one of some natural red wine with a splash of lambic in it - but everything is so tightly interwoven, that the lambic is no longer separable from the grape component in any way: this is not just lambic enriched with grape juice, this is an actual red wine that has developed and grown in the womb of lambic. Both are one, an organic whole, and no separations of beer and wine are left. What a product like this may perhaps 'lose' in 'beeriness', it gains in intellectuality and spirituality. Brilliant is an understatement here - this is not just the most impressive grape lambic I ever had (and I had a few), this may well be among the most impressive 3 Fonteinen 'beers' I ever had (and I had a few). This deserves a much higher score here so let me help by awarding it something close to perfection. 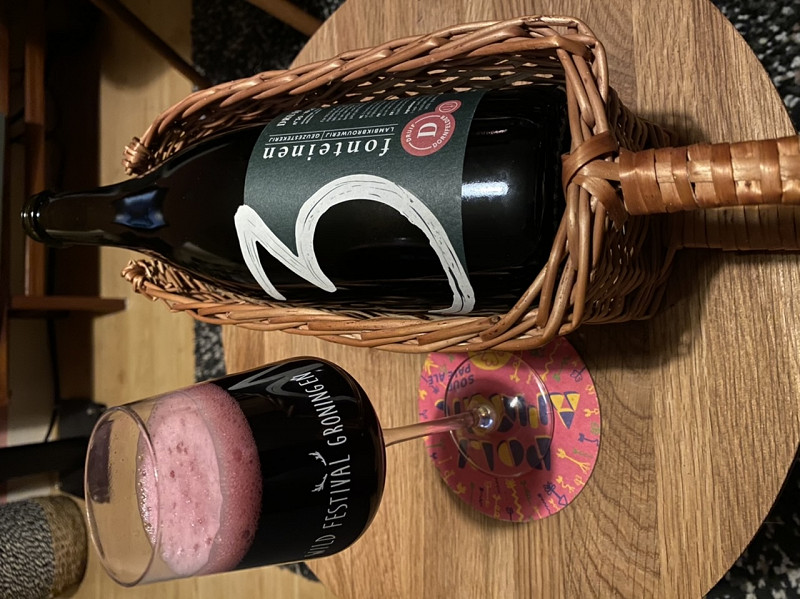 Tried from Bottle at Kamienica Hoża 41 on 21 Dec 2020 at 21:43
We use cookies to give you the best online experience. By continuing to browse the site you are agreeing to our use of cookies.