Lambic Style - Framboise Regular Out of Production
3 Fonteinen Hommage is a lambic blended with raspberries and cherries. The concentration and ratio of raspberry to cherry varies by batch and is not always known. This entry is for the Hommage versions with bio fruits, as well as honey.
Sign up to add a tick or review

Special edition of 3 Fonteinen's classic Hommage, with added honey to spark refermentation. Bottle from Lambik-o-Droom, shared with Goedele. Pale off-pinkish, moussy, loose-bubbled and open, champagne-like head fizzing away quickly into some lonely bubbles along the edge of a misty crimson red beer with somewhat amberish tinge and strings of lively sparkling throughout. Intense nose of a ton of red raspberries, very generous sour cherry but clearly less so than the raspberries, raspberry bush leaves, almond or even a brief whiff of marzipan, old dry plywood, unripe plum, wild cranberry, crémant brut rosé, sour orange, bitter garden weeds, minerals, something sulfuric in the background (freshly struck match). Utterly fruity onset, again a wave of sour-sweet red raspberries and a solid layer of sour cherry underneath, the sourness enhanced by intensely sparkling, cava-like carbonation with a rather 'large' bubble texture, unripe stonefruit and wild red berry astringency around the edges further drying the mouth - but the sheer fleshiness of the fruit offers a bit of softening. Slender bready core drowning in this ongoing train of red fruit, coloured by lambic acids and, towards the end, woody tannins, a lot of lingering minerality from the carbonation (no doubt amplified by the fermented honey), green-leafy accents and a dash of Bretty 'horseblanket'. The sour, crisp, fleshy red fruit rules supreme from beginning to end, though, reminiscent of my grandmother's orchard - with all the lambic complexities and finesses remaining intact. The honey adds a clear, sleek minerality that lacks in the ordinary version - but it fits in well, even softening the acidity a bit, as this one somehow feels less puckering sour than the ordinary version. A very clear improvement of the already great original for me.

Bottle shared with E, C's and V. Intense fruitiness, with pronounced raspberry. A touch too sour, but still balanced on the jammy side of Hommage. Elegant.

Thanks Shuichi for sharing! Taster showing deep red with quickly dissipating pink tinged foam. The nose shows sharp acetic notes of raspberries. The palate is well carbonated and light bodied with strong acidity throughout. Highly tart with moderately intense flavors of raspberry on the end with brett and acetic vinegar notes throughout. Intense tartness combined with the vinegar acidity makes for a very unpleasant experience. 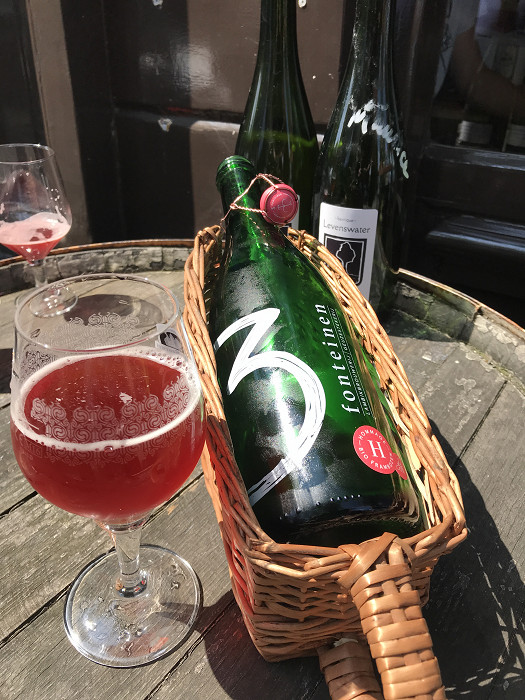 Tried from Bottle on 22 Jun 2019 at 13:17
Next
We use cookies to give you the best online experience. By continuing to browse the site you are agreeing to our use of cookies.