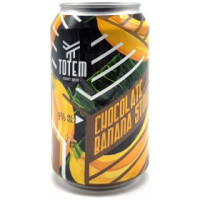 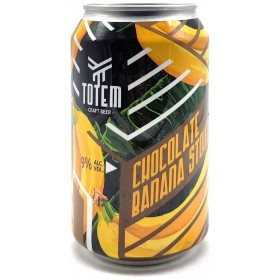 Stout - Pastry Regular
Sign up to add a tick or review

Pastry(ish) stout by Totem, containing lactose and banana - real bananas that is, and I am not entirely sure if I ever had a beer containing those before. Apparently an idea by the brewer's lovely wife, Liesbeth Van Raemdonck, so a good occasion to put her in the spotlight, for the amount of work she does in the brewery. I had this one several times before, but now I finally get to properly rating it from a can at home. Greyish beige, small-bubbled, open head, very thin and eventually dissolving all but completely - maybe bananas are not the most 'foam-positive' element you can add to beer; black robe with thin, hazy burgundy edges (under bright light). Strong and unusual aroma: indeed a lot of actual ripe banana but now (after several weeks) even shifting to banana liqueur 'à la' Pisang Ambon, caramel sauce, 'Koetjesreep', maple syrup hint, coconut milk, molasses, paraffin, cold cappuccino, light but clear smoky touch (freshly extinguished candle), brown rum, drying shoe polish, treacle, brown soap, vague liquorice in the background. Sweet onset, lots of residual dark sugariness mingled with the banana effect, but also some light fruity notes of ripe pear and date; fine carbonation, very full and syrupy mouthfeel. Deeply toffeeish maltiness ensues with a thick coating of this sweet and creamy milk sugar, making for a somewhat chocolatey effect but still Ersatz chocolate-like rather than that deep and almost 'real' chocolateyness you can get in many (mostly American, or at least American style) strong stouts. That paraffin note, linked to the smoky accent, shows up in the finish, but underneath lies quite a bit of roasted bitterness too, seemingly drowned a bit in the banana and lactose sweetness but certainly there, like a deep 'underground' structure supporting the rest. Warming, rum-like alcohol mingles with the banana in the finish, again creating a vague association with Pisang Ambon, but eventually becomes a tad wry as well, which matches less with the overall sweetness - fortunately this wryness goes away quickly, and the trusted banana, toffee and even coconut impressions return, even if solventy effects (shoe polish) remain quite stubborn too. Decadent as it gets especially to Flemish standards - Liesbeth clearly has the balls to come up with something many may find too decadent. Not Totem's greatest achievement in the stout area so far (and I am including their initial period as a client brewer), a bit too sweet, too solventy and too boozy for me personally, but I sure admire the guts of coming up with something like this - even for Totem. Cheers to Liesbeth - and Klaas too of course, to whom I owe so many 'sneek previews' of their new beers.

Pours black, no head. Scent is full, banana, roasty. Taste is full, roasty, banana puree. Roasty malts, chocolate (bit bitter) . Actually a quite nice beer, even though I tend to really dislike banana stouts. This one is not pastry style though, more like an irish export + banana and chocolate. Still not in love with it, but avoiding the sweet-on-sweet definately helps !

Tried from Can from Bierhalle Deconinck on 04 Jul 2021 at 11:16
We use cookies to give you the best online experience. By continuing to browse the site you are agreeing to our use of cookies.