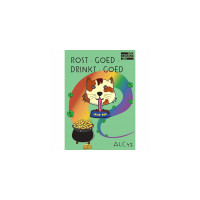 Dok's interpretation of the standard Irish red ale, served at their premises in Ghent through nitro tap, as is custom with commercial examples of this semi-style; the name seems to refer to a rather indecent Flemish saying about gingerheads, a saying I am reluctant to explain here... Thick, extremely dense and creamy, cream white, thickly plaster-lacing 'nitro head' on a misty deep copper red beer with bronze core and fine nitro bubbles rising up along the edges, merging with that layer of cream that is the head. Aroma indeed with very clear nitrogen factor as in nitro-tapped Kilkenny or even Guinness, over impressions of old peanuts, dry tree leaves, wet toast, rust, rainwater, dry tea, hard caramel without the sweetness. Dryish onset, very refined nitrogen bubble effect, dryish malt core but with a malt-fruity edge, pecan-nutty and toasty-bitterish, peanut and Pumpernickel hints, more bitter in the finish when this herbal, leafy hoppiness is added. Slick, very creamy due to the nitro tap treatment, smooth nutty malt bitter with a fruity edge: this is indeed very much Irish red, a rather artificial style invented for commercial reasons in a not so distant past - even that awful bottom-fermented Kilkenny has features similar to this one, but Dok very clearly surpasses such mass-produced examples. Another proof that Janos De Baets and his crew master a very broad scope of beer genres, both popular craft genres and this kind of twentieth-century traditions. Kudos to that, even if the commercial style of Irish red will probably never conquer my heart.

Tried from Draft on 01 Aug 2021 at 18:50
We use cookies to give you the best online experience. By continuing to browse the site you are agreeing to our use of cookies.