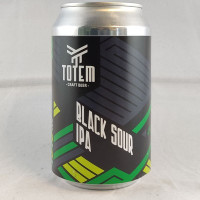 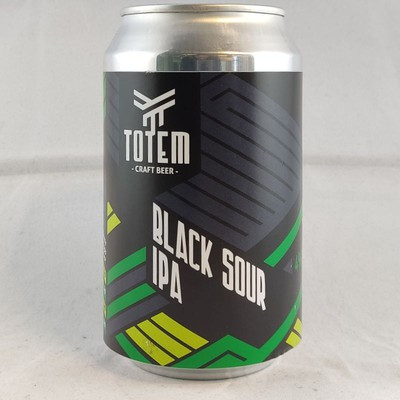 One of the newerTotem beers to date, and in the true craft beer vein this brewery has always followed, a 'hybridization' of different styles, in this case black IPA and sour IPA - with the sourness not accomplished by means of lactic bacteria this time, but by means of Lachancea, the only yeast capable of producing lactic sour, and introduced in the beer world in the form of a beer style called "Philly sour". Can from Geers. Quite thick and frothy, shred-lacing, greyish beige, irregular but stable head on a pitch black beer, allowing almost no light to pass through, but still showing a waferthin edge of a caramel brown hue. Aroma of burnt toast and burnt currants, milk gone sour or sour cream, coffee grounds, elderberries, pine needles and grapefruit juice conveying the BIPA feel, some toasted onion even, salmiak, green birch tree leaves, vague and brief note of raspberry vinegar, more 'permanent' stale sweat or even sweaty socks in the background. Crisp onset, gently 'milk sour' indeed, with fruity effects reminiscent of blackberries and blackcurrants, some citrus 'fraîcheur' as well (pink grapefruit), but low in sweetness; high effervescence, but the sparkling does increase the overall crispness and works well with the lactic sourness. This sourness, in a sour cream- and sharper blackberry-like way, continues unabatedly through a dark malt profile, adding brown bread crust, burnt toast and eventually roasted chicory effects; the bitterness and the sourness both come to a zenith in the end, in a powerful but aromatic way, especially when piney and grapefruity hops come into the picture; dryingly sour finish, crisp and actually refreshing, with the Lachancea sourness and general black IPA bitterness remaining well in balance with each other, without clashing too much. Powerful session beer, pungent and original as well, especially to Belgian standards - it is remarkable how this brewery still manages to pleasantly surprise me, in spite of having followed them from the start and having tasted many dozens of their beers... Klaas and Liesbeth truly are at the cutting edge of U.S. (and now global) style craft brewing in Belgium. They deserve a statue as far as I am concerned.

Draught Due to insufficient lighting conditions, arbitrary 4/5. Coffe, mocha, and sweet toast, coffeemilk. In the mouth however, the Philly Sour gives soft lactic acid, hints of sugars, both candi sugar and lactose. Faint ureum and caramel in the finish. Lipsmacking sourness - despite the soft acidity provided. Mild carbonation, not very dense body. Likeable, even if it is more interesting than great.

Tried from Can on 13 Sep 2021 at 06:25
We use cookies to give you the best online experience. By continuing to browse the site you are agreeing to our use of cookies.