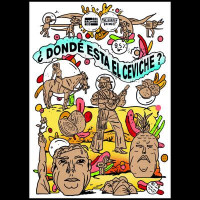 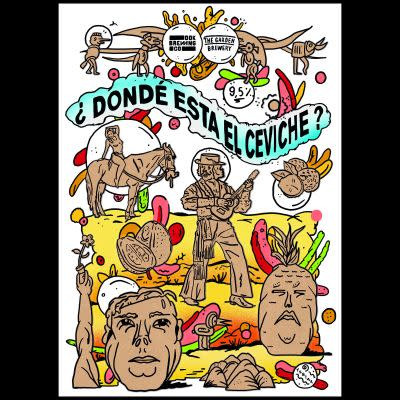 New NEDIPA by Dok Brewing Company - taking things literally and adding actual guava and lychee to the mash. From tap at Dok itself. Snow white, moussy, shred-lacing, stable head on a cloudy yellow blonde beer with somewhat beige hue. Luscious nose of indeed guava, lychee less obvious but noticeable too, maracuja, pomelo, bread pulp, cold French fries, green onions, Conference pear, unripe pineapple, kiwi, gin, sweaty note. Fruity onset, spritzy carb, the guava and lychee coming through early and easily - but not much more so than in any other NEDIPA where these aromas are generated by just the hops; in any case very fruity-juicy, with impressions of pineapple, green mango and lime zest as well. Full cracker- and cold fries-like malt core, aromatized by all the green mango, maracuja and pomelo from the hops and of course the guava and lychee, again blending in with the hops rather than working against them, as is sometimes the case in fruit IPAs. Remarkably and surprisingly long and firm end bitterness, hoppy in nature, but enhanced by gin-like alcohol; this degree of hop bitterness in the finish is very atypical for anything NEIPA-inspired, in fact one could almost argue that this beer starts off as a NEIPA and then moves to a West Coast-like tail. The most remarkable aspect here, though, is how the added tropical fruits blend completely with the tropical fruity character of the hops, only highlighting that character without interfering with it. In all, quite a surprising IPA by Dok, a very interesting one.

Tried from Draft on 12 Sep 2021 at 19:45
We use cookies to give you the best online experience. By continuing to browse the site you are agreeing to our use of cookies.