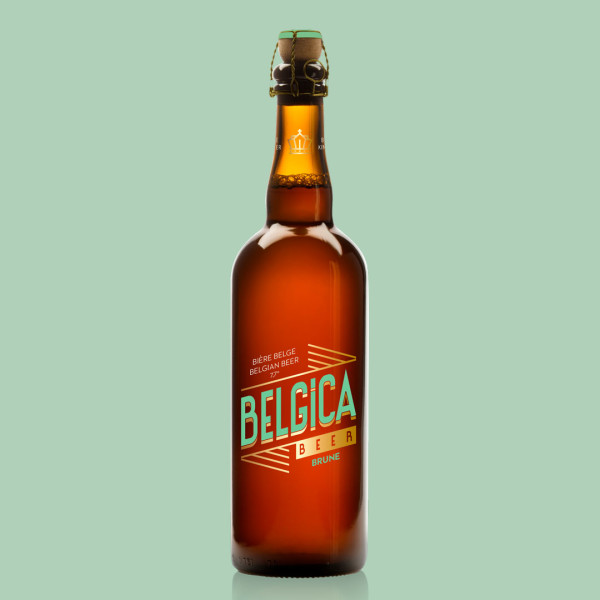 The dubbel in a string of Belgica beers, intended to once again rehash the 20th-century 'Belgian beer' brand for pure commercial reasons - the 'Brasserie de Londres' producing this is led by a "beer expert" and a "sales manager" and these beers are already available in Carrefour supermarkets - no way am I going to believe that this is brewed in their own microbrewery, if they already have one, but as usual with this kind of brands, the actual brewery is nowhere mentioned (Binchoise could be a possibility, if I would have to make a wild guess). Steinie bottle from the Carrefour hypermarket in Oostakker. Very thick, foamy, rocky, pale yellowish beige, thickly plaster-lacing, stable head on a clear, deep chestnut brown beer with ruddy-mahogany hue and tiny dots of dark, dead yeast bits throughout. Aroma of caramel candy, old brown bread dough, damp autumn leaves, old moist walnuts, old honey, wet brown cardboard, medlar, clove, dust, sugared tea, wet coriander powder, hints of banana, damp earth, old 'soepvlees', rusty iron. Fruity onset but not as sweet as expected, hinting at medlar, halfripe pear and apple peel, some vague banana ester but very restrainedly so, sourish undertone, fizzy carbonation with minerally effects; slick caramelly body, brown-bready core somewhere, nutty too with even a certain toastiness to it - but there is an unpleasant kind of bitterness lurking in the background which reminds me of bitter medicine or old aspartame. Leafy hoppy note too, connecting with the toasty aspect, though caramel sweetishness remains dominant; phenolic spicy notes of clove and old nutmeg appear too, more so than expected actually, while some dried fruitiness lingers along with the caramel and the toast. That chemical bitterish touch, however, ruined it for me, though on the other hand I have to admit that this beer feels less artificial than I was fearing; my sample probably has its heydays far behind it as well, after spending who knows how much time on a supermarket shelf (rarely the right place for beer to begin with). Less bad than feared, but still crude, unrefined, unbalanced and a bit amateurish so my apologies to the beer expert and the sales manager, still no high score from me.

Tried from Bottle on 31 Dec 2020 at 12:31
We use cookies to give you the best online experience. By continuing to browse the site you are agreeing to our use of cookies.