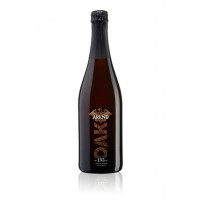 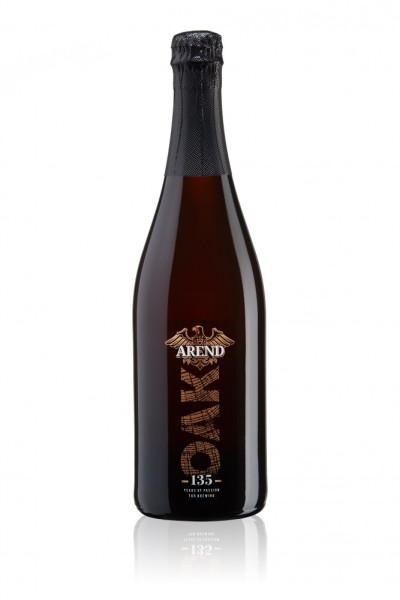 Very good, just off-white head, stable over clear coppery, lively carbonated beer. Boozy nose, alcohol-drenched wood, orangepeel, orangeliqueur, sweet and lightly coloured malts. Sweet-ish, also because of the high alcohol content. Again orangepeel/orangeliqueur. Bit sticky feel, despite the lively carbonation alleviating. Tad too boozy in character and hence too sweet for me. It gives an impression as if alcohol was infused. Not a beer that induces to have another one, to put it mildly. Thanks to Stef!

Special edition of De Ryck’s silent classic Arend Tripel, flavoured with oak chips, in honour of the 135th anniversary of the brewery; was sold together with a liquor distilled from the same beer in a luxury pack. Thanks to Meeki Meekio for sharing, cheers! Tightly moussy, very stable, egg-white head on a misty peach blonde beer with ‘metallic’ orange hue. Aroma of baked banana, indeed vanilla-scenting oak wood (more so than I was expecting – oak chips have apparently been used very generously), hard caramel, almond, dry biscuit, brandy, fried potato, bread pulp, banana peel, clove. Cleanishly fruity onset, hints of pear, peach and banana, fizzily carbonated with moderately full, slick mouthfeel; biscuity, very lightly caramelled and bread-crusty maltiness makes up the core of this beer, enriched with some indeed only softly tannic but unmistakably vanilla-scenting woodiness, gentle spicy notes of clove and allspice, soft floral hops and warming, brandy-like alcohol. Dried fruit and spicy yeast linger. Quite a noble beer, well-‘wooded’ in spite of the fact that no barrel ageing was applied – in that sense an exercise in refinement, which a brewery of 135 years old should indeed be capable of. Glad I tried this one.

Tried from Bottle from Dranken Geers on 02 Jan 2022 at 17:00
We use cookies to give you the best online experience. By continuing to browse the site you are agreeing to our use of cookies.