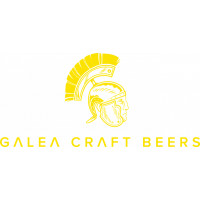 Stout - Imperial Regular
Sign up to add a tick or review

One in a still growing series of barrel aged variants of Galea's newish imperial stout called Antwerp, aged in brandy barrels and flavoured with vanilla, coffee, cocoa and cinnamon. Opens with a bit of 'gun smoke' escaping from the bottle neck. Quite thick and frothy, pillowy, audibly crackling, mocha-tinged beige, coarse and opening but edge-retaining head over a jet black beer with hazy mahogany brown edges of one millimeter off the edge - at most. Intense nose of coffee liqueur, Napoleon brandy, hot chocolate sauce, upper class quality Belgian chocolates, vanilla-exuding oak wood but (even stronger) also vanilla beans, kahlua, clear cinnamon powder (strong), molasses, date wine, toffee, almond, hints of mocha ice cream, marzipan, 'pepernoot', oak aged dark rum, wet leather, Moroccan pastry, coffee cream, sweet paprika powder, cold Glühwein, blanched green beans, shoe polish. Sweet onset, dense and 'candied', candied dates and some ripe pear (Doyenné), sourish blackberry touch, lively carbonation but fine-bubbled and in that sense not interfering too much with the flavours; treacle- and marmite-like, thick dark sweetness sticks a bit, especially when the middle phase unfolds, exhibiting layers of black chocolates filled with cognac, toffee, toasted pecan nuts and nougat, yet somehow this blackberryish sourish edge manages to tone down the sweetness a bit. Lots of cocoa apparent, then cinnamon and vanilla bean, matching well with that thick, almost sluggish, molasses-like maltiness - which is at first dried by woody tannins and then thinned by indeed very brandy-like alcohol, in a dryish kind of way, less sweet than e.g. cognac would have been. A peppery hop bitter note supports the coffeeish roastiness in the finish, but explicit bitterness is never achieved; instead the sweetness continues, accentuating the already syrupy character of the beer. Still, the booze does make it lighter-bodied and more slender, adding also a kind of 'greenish' touch somehow - difficult to pinpoint, but 'blanched peas' comes close enough for lack of a better description. Lots of vanilla and cinnamon linger, but as feared, the alcohol becomes really hot after a while, and starts to annoy me with its astringent effect on the root of the tongue. It seems as if in craft-brewing Europe, imperial stouts - barrel aged or not - are under pressure to be unreasonably strong in order to impress, a phase they went through in the U.S. as well (remember World Wide Stout), but I call bullshit: beers like this, in their sheer make-up and structure, are potent enough without all that unnecessary booze, which makes them only more crude and unbalanced. This one too should have been kept at 10-12% ABV max. Too much muscle-flexing and too little finesse as usual in this segment - nowadays and in present-day Europe at least - but in that category of trying to be impressive, this is a colourful, multi-layered example, as there is indeed much worse. Treat this like a fortified wine, sipping it in small quantities at a time, and you will probably be satisfied with it. And admittedly it does fit a cold January night very well so I will be mild in my rating.

Tried from Bottle from Bierhalle Deconinck on 19 Dec 2021 at 12:39
We use cookies to give you the best online experience. By continuing to browse the site you are agreeing to our use of cookies.