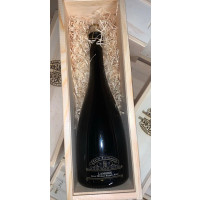 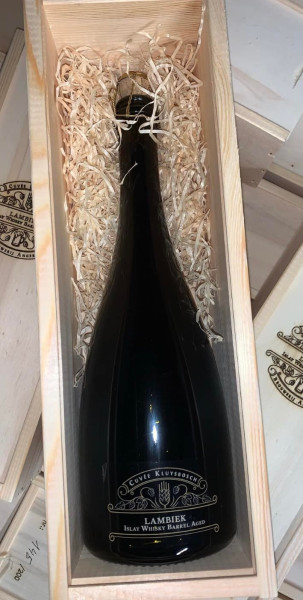 Earlier this week, the Den Herberg brewery was inducted into HORAL's hall of fame of lambic brewers and blenders, the result of almost four years of mastering lambic brewing and blending, after an initial decade of brewing top-fermented ales in traditional Belgian styles. Who knows, maybe a similar honour could go to Angerik in Dilbeek, in the northern part of the Pajottenland west of Brussels: following in Herberg's footsteps, they too, after many years of brewing classically styled Belgian ales, have now taken the step to dip a toe in lambic brewing - the one style most tightly associated with the Pajottenland region. After they deemed the first results successful enough, they made a bold decision and took an Islay whisky barrel to age their lambic in - Islay whisky being notable for its peated character, something not necessarily working well with the delicate features of lambic; after half a year, the result, dubbed Cuvée Kluysbosch, was bottled in luxurious 'champagne cuvée' bottles with cork and muselet and packed in branded wooden boxes. Only 200 such bottles were made - and sold out in less than a day, so I am forever grateful to Poseidon Beers for helping me get one. Dense and tiny-bubbled, egg-white, creamy to even pillowy but regular, medium sized head retaining remarkably well (only slowly opening in the middle after fifteen minutes or so, but dissolving nonetheless another fifteen minutes after that); initially clear, deep and warm honey-hued orange blonde, almost amberish from the wood, with masses of tiny bubbles rushing throughout, turning misty further on - so far so good as far as looks are concerned. Strong bouquet of indeed very obvious and smoky peat, not just bags of moist peat like my grandmother had them in her cellar but iodine or even brine as well with peated whisky associations (Ardbeg, Laphroiag, Lagavulin and so on) immediately made, weighing heavily on lambic features of ripe gooseberry, damp hay, wet old oak wood with even a dash of vanilla, cheese spread or even young abbey cheese, sour cream, sorrel leaves, fermenting orange peel, dry cider, minerals (as in spring water). Colourfully fruity onset, gooseberry, wild apple, green plum, grape skin - acidic but not overly sharply so (in spite of a thin lemony edge), with a prominent unripe stonefruit-like astringency to it but also a softer, sweeter core vaguely reminiscent of peach; minerally carbonation effects from refermentation in the bottle, but in a soft way, adding enough liveliness without coming to the foreground too much. Supple, full mouthfeel, a smooth breadiness deeply soaked in lambic dryness, lactic tartness and light and still playful 'Bretty' funkiness, with this sour cream- or even goat cheese-like aspect on its edges; drying woody tannins gain considerable strength in the finish, and so does the peat, bringing all its smoky and iodine-like features to the foreground, indeed very peated whisky-like and lingering for a long time, adding a certain 'meatiness' and further dryness as well. Woody, noble, tannic but still fruity finish, hops nearly absent though 'structurally' there - again, with the peat remaining in both nose and mouth for quite a while. Impressive for its sheer boldness: this one takes Lambiek Fabriek's Colon-Elle (also involving whisky barrel ageing) a step further, probably in an attempt to distinguish Angerik lambic from the rest of the market immediately and decisively, considering what is on that market already. Intense indeed, I am not entirely convinced yet if the delicate and 'malse' character of the young lambic in question is up to the task of carrying such a hefty amount of peat on its frail shoulders though - I think backblending this with lambic of other ages (in the future of course since older Angerik lambics simply do not exist yet) may yield beautiful results though. Fascinating newcomer - and promising to say the least. Watch out for more lambic experiments from this brewery, which after all these years manages to seriously surprise me.

Tried on 15 Jan 2022 at 00:19
We use cookies to give you the best online experience. By continuing to browse the site you are agreeing to our use of cookies.