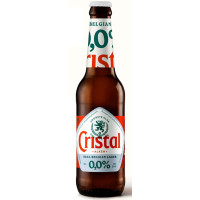 Pours clear (cristal clear) blonde. Medium sized white head. Scent is fatiguingly cloying, sweet, generic industrial NA. maltsyrup, tad hoppy perhaps - but not in an IPA way, only compared to the standards of it's category. Taste is mildly bitter, which gives a fresh idea, but it's fairly sweet towards the back, still - making it cloying, but indeed less cloying than most industrial NA's. Maltyness (syrup) is fairly loud. Medium to medium high carbo over a medium thin body. OK, not competition for the craftbeer NA's, but one of the better industrial ones.

The alcohol-free version of Limburg's classic Cristal Alken, on the market since 2018 so strange that no one has added it here yet; made with hop extract and added "aroma". Longneck bottle from a Delhaize supermarket. Thick, moussy, snow white, irregularly but persistently lacing, very stable head, crystal (sic) clear pale 'metallic' platinum blonde robe with lots of vivid sparkling. Aroma of soggy chicken food, flour, rice crackers, wet white paper, vague notes of grass and wet cotton cloth. Neutral onset, spritzy carbonation as in sparkling water, grainy sweetishness with a dim sourish undertone, bit plastery and very thinly doughy with metallic edges; develops some bitterness over this graininess in the end, vaguely floral in a very muffled kind of way, grassy but also a tad chemical, as is usually the case in this kind of industrial 'beers'. I can see the parallel - as compared with e.g. the non-alcoholic version of Maes - with the original Cristal Alken in being a tad hoppier, even though the hop bitterishness here comes from extracts only; in that sense it relates to its original like the non-alcoholic Maes relates to its respective original. That does not make it good, of course - this is again a typical alcohol-free pale lager, and even in this segment it feels obsolete now that so many other non-alcoholic beers keep appearing which are not based on 'pils'. But it certainly is not the worst around - compare with non-alcoholic Stella, for example, but feeling just a bit hoppier and more convincing as a pale lager.

Tried on 12 Feb 2022 at 16:02
We use cookies to give you the best online experience. By continuing to browse the site you are agreeing to our use of cookies.