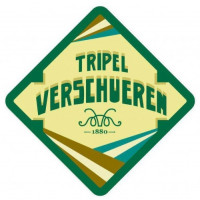 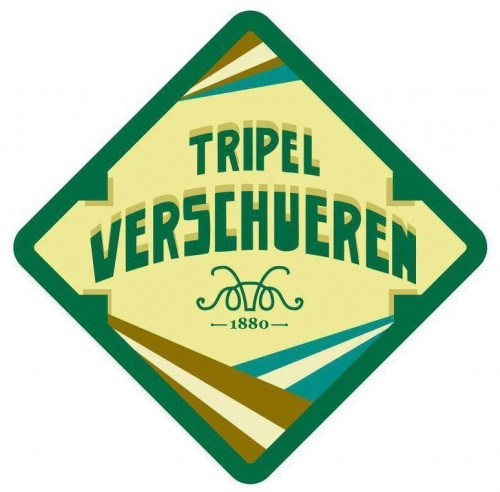 Belgian Style - Tripel Special
In Brussels everybody knows Brasserie Verschueren, this iconic art-déco café on the Parvis de Saint-Gilles. For a few years, we have been brewing their house beer: Tripel Verschueren. This original brew is based on Jambe de Bois, but it is hopped differently. The result is a slightly more classical Tripel, with a lighter bitterness, more present malty notes, and a delicate citrus flavor. As the bar was forced to temporarily close due the coronavirus crisis, the Verschueren team asked us to help diffuse their beer for a while, which we agreed to do with pleasure!
Sign up to add a tick or review

The house beer of Brasserie Verschueren in Saint-Gilles (Brussels), made especially for them by De la Senne, seemingly to a recipe that is close to that of their own Jambes-de-Bois, but not quite the same. Many thanks again to tderoeck for the bottle - now close to two years old, and with very old-fashioned label. Opens with a hiss, but no gushing. Thick and frothy, irregularly lacing, even-bubbled, eggshell-white, stable head on a misty deep 'old gold' coloured beer with ochre-ish hue and strings of lively sparkling here and there. Aroma of halfripe banana, green apple, distant touch sour grape even, white bread, cold potato mash, paraffin, hard pear, straw, brown soap or indeed coriander seed, plaster, gin, unripe pineapple, old dried out lemon peel, vague whiffs of white pepper, camphor, 'pistolets' and camomile. Sweetish onset but restrainedly so, hints of banana, pear and apricot, light sourish undertone briefly accentuated by very lively but - for this style - fitting and actually quite 'refined' carbonation, full, bit fluffy yet smooth, albeit somewhat soapy body. Bread-crusty, cereally and bit doughy malt profile, dryish, with some fruity and spicy accents from the yeast, evolving into an earthy, floral hoppiness that provides quite a long-lasting, gently but persistently drying and quenching bitterness over an already relatively dry bready malt profile; some green fruit and white pepper aspects linger in a finish still confidently bittered by the hops, mildly spiced by soapy coriander seed and warmed by a gin-like alcohol glow. Like Jambes-de-Bois, which - from memory - seems eerily close to this one, a dry, hoppy tripel indeed, exactly the kind of tripel one expects from this brewery, positioned against the excess supply of overly sweet tripels flooding the Belgian market. A bit predictable perhaps - this profile is exactly what I had in mind before opening the bottle - but technically well done, and after two years of aging, still in the prime of its life, though I imagine the hops having been more aromatically pungent and citric when this was still young (as reflected in some of the ratings below).

Bottle, many thanks King_Alex_II! Unclear glowing golden color with creamy white head, beautiful. Aroma is flowery, intense apricot jam, candied apples, the aroma turns a bit phenolic after a couple of sips. Taste is intense apricot (I know I use the word apricot a lot when describing Tripels, but this is a whole other level than other Tripels), a touch phenolic, bready, other sweet fruits, peach milkshake, dough. Soft carbonation, slightly boozy aftertaste. A fantastic Tripel with an unusual character (which is rare in Tripels, even in the good ones), hats off Yvan! Nom.

Bottle. Pours hazy yellow with a big head. Aroma is strong yeast, clover, sausage peel, flowers. Body is medium yet quite intense, with a decent punch of sweetness and bitterness. Soft but present carbonation. Floral flavours over chalky minerals, some zesty fruit too. Almost dry palate, yet still full in volume, even a little boozy. Good!

Tried on 31 Aug 2014 at 03:20
Next
We use cookies to give you the best online experience. By continuing to browse the site you are agreeing to our use of cookies.