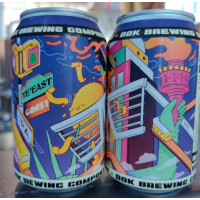 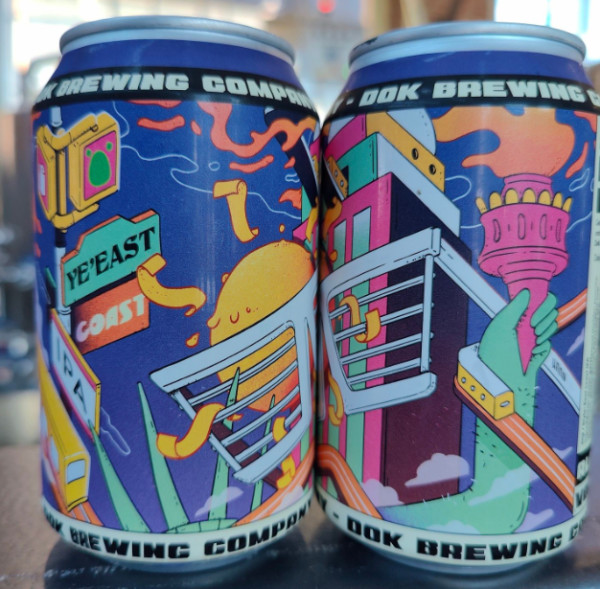 Pours a very hazed, dark amberblonde. Medium sized, fairly creamy white head. Scent is fairly mild, especially for an IPA. Bit malty, traces of hops. Taste is full, very bitter, crispy malts, tad green and herbal - definately not as fruity as NEIPA, or Piney as West Coast. Definately ampes up though, but still very enjoyable, and by no means off. I would have enjoyed more aroma though, this feels rather blend at first, but finishes off with a good bitterness.

I guess only older craft beer aficionados, especially in Europe, will remember the softer, fruitier East Coast IPA substyle, which conceptually and chronologically preceded the ‘haze craze’ of New England IPAs that came afterwards – and flooded almost everything else in the IPA world; but Dok, being the investigative brewery that they are, seems committed to do every beer style in existence at least once, so here is their interpretation of what such a ‘pre-NEIPA’ should be like. Can bought at Dok and shared on site with Meeki and Steve. Egg-white, firm and frothy, plaster-like lacing, regularly shaped head on a hazy pale amberish-tinged orange blonde robe with vague beige hue. Aroma of dried orange peel, rusk, baker’s yeast, unripe apricot, moist paprika powder, straw, dust, minerals. Crisp onset, dryish and quite sharply carbonated, hints of green pear and unripe banana, minerally effects from the carbonation continuing into a slender, slightly peanutty, bread-crusty maltiness, developing a kind of ‘dark green’ hop bitterness further on, citrus pith- and wormwood-like with a peppery edge; bready yeasty notes linger. Quite bitter and actually closer to classic West Coast than what I remember as East Coast IPA, but in any case sufficiently ‘old school’ to detract attention from the oversupply of NEIPAs these days. Very decent IPA, in all.

Tried on 05 Sep 2022 at 15:35
We use cookies to give you the best online experience. By continuing to browse the site you are agreeing to our use of cookies.