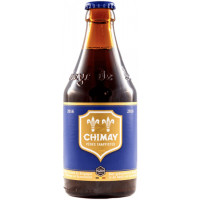 Belgian Style - Strong Ale Regular
The Chimay Blue is a dark ale with a powerful aroma. Its complex flavor improves with passing time. The 75-centiliter version (since 1982) is called ''Grande Réserve'' because of its great storage potential., It was first brewed as a Christmas beer by the monks of Scourmont Abbey in 1956. But after its great success, it was decided to offer it permanently.

It was initially launched as a Christmas beer,
Sign up to add a tick or review

Tried at Korsakov on 25 Nov 2019 at 17:47
Next
We use cookies to give you the best online experience. By continuing to browse the site you are agreeing to our use of cookies.