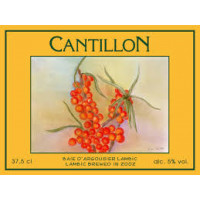 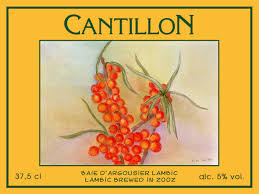 Lambic Style - Fruit Regular
Lambic with a kind of Sea Buckthorn, that growns in the mountains. ( It appears there isn't a real translation for it )
Sign up to add a tick or review

Bottle at Stadin Panimo. Slightly hazy orange with a brief white head. Funky barnyard, quiet a bit of sea buckthorn, some light cheesy tones, cloudberries and minerals. Quite a bit of resemblance to Soleil. Tart seabuckthorn finish. Great one!

Cantillon lambic with sea buckthorn, an unlikely fruit to be found in traditional lambic, but originated as a specialty beer for One Pint's Pub in Finland, comparable to the way Soleil de Minuit and Blabaer originated, as commissioned beers with 'nordic' fruits not traditionally used in Belgium; raving reviews, relative rarity and the fact that this comes from the most popular of traditional lambic producers, have lead to similar effects in creating a legendary status for these beers, and vintage bottles of this one change ownership on the secondary market for astronomical prices. For reasons unclear to me, however, Cantillon has been selling this beer at their brewery for quite a while now - at a price of 'only' 12 euros - but understandably, and I assume in agreement with One Pint's Pub, it is only available for on-site consumption (and doesn't even have a back label). This rating concerns a bottle consumed at Cantillon. Creamy and dense, egg-white, membrane-lacing head, thick and stable initially but eventually dissipating; hazy warm orangey-hued peach-golden colour. Crisp, elegant, noble bouquet of sour sea buckthorn berries indeed but not overwhelmingly so, sawdust, dried lemon peel, lime juice, Bretty 'sweat' effect, bread crust, dusty attic, sherry vinegar, green sour apples, damp haystack and eventually, when pouring in the sediment, a vague and less pleasant note of rotting potatoes, but as this only appears in the very end and remains volatile even then, I will not take it into account too much. Crisp sour onset, very refreshing lemony sour berry effect with a subtle note of berry peel wryness; the fruit acidic as well as lactic sourness dry a pleasantly bready, somewhat cracker-like malt base. Woody and berry skin tannic notes in the finish, a bit astringent of course but far less so than expected based on this fruit's reputation of being very wry, with a lovely sour green apple note (light apple vinegar even), Bretty sweat and hay effects and dusty aspect. Very nice Cantillon indeed, very refreshing and drinkable yet well-bodied and complex, with a pleasant sourness that turns out far less sharp and astringent than I was expecting, so in that sense this is masterfully done. Glad I could taste it without having to pay a small fortune for a bottle... Thank you for that, Cantillon, now do the same with Blabaer and Soleil please.

Tried from Can on 25 Sep 2018 at 05:46
Next
We use cookies to give you the best online experience. By continuing to browse the site you are agreeing to our use of cookies.