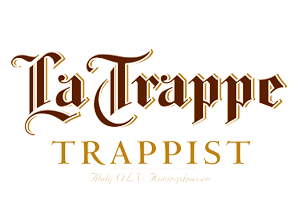 Trappist ale has been brewed at the Abbey of Our Lady of Koningshoeven in Berkel-Enschot since 1884. The monks of the abbey are the origin of this ale. They are popularly called "Trappists", after the origin of their order: the French Soligny-La-Trappe. This order is characterized by austerity, silence and the duty of charity.

Within the abbey walls, Brewery de Koningshoeven produces Dutch Trappist ale. Still under the supervision and responsibility of the monks and still based on the inner conviction "to do good": part of the proceeds go to charities. These original principles provide La Trappe Trappist with the exclusive label "Authentic Trappist Product" from the International Trappist Association.

Between 1969 and 1980 the beers were produced under license by Artois (InBev). By 1999 the monastery had become a subsidery of Bavaria - Netherlands this resulted in La Trappe beers no longer displaying the Authentic Trappist Product label. In 2005 an agreement was reached by which the monks would take a more active part in the brewery operation and so the label was restored.
Next