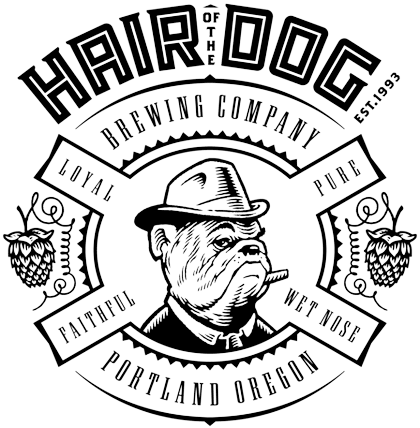 Hair of the Dog Brewing Company

Hair of the Dog Brewing Company was founded in November of 1993 with the purpose of providing beer lovers with new and unusual beer styles. Creativity and originality have been cornerstones of the company's philosophy since it was founded.

Each Beer has its own name and unique identity; like the people who have inspired them. The brewery is family owned and operated, a proud member of the Oregon Brewers Guild as well as the Pacific Northwest's rich brewing heritage. We produce over 600 barrels of Beer a year in our 4 barrel (120 gallon) Brewhouse and bottle approximately 5000 cases a year. The rest of our beer is served on draft in our tasting room and at a few select accounts in Oregon and elsewhere.

Hair of Dog is proud to be one of the first breweries in America specializing in the production of high alcohol, bottle conditioned beers as well as experimenting with the barrel aging process since 1994. Currently, the brewery has 180 oak barrels used to age Beer from 6 months to 8 years. We use new oak as well as previously filled spirit and wine barrels. All the Beer is made by two Brewers, Denver Bon and Alan Sprints.

We are also dedicated to buying local products for both the Brewery and restaurant in an effort to keep as much of our money in our community. We work directly with farmers whenever possible and are proud to say that 99% of all the ingredients we use are produced within a 350 mile radius of the brewery. Our Organic Pilsner malt is from Gambrinus Malting in British Columbia, the water runs pure from the Cascade mountain range, hops are grown in Oregon and Washington and both bottles and labels are made in Portland. Since we opened all the graphic design has been created by the Felt Hat of Portland. The original brewing equipment has been recycled from other industries and is still in use today. After Brewing all the ingredients are used for animal feed by a local farmer.
Next