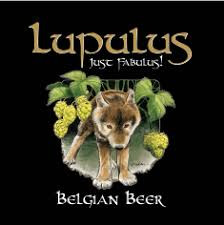 In the beginning, in 2004, the Lupulus brewery was built to brew beers for the tavern next door. In 2007, the brewery decided to create a new beer, in kegs and in Champagne bottles. The brewers wanted to offer a traditional beer with its own unique flavour, using modern equipment. The region where the brewery is based gave the brewers the inspiration they were looking for. The brewery is housed in a magnificent old 19th century farm, a part of Ardennes heritage. The installation is based in the middle of surrounding green fields, beside a freshwater stream. The historical record is sketchy, but we know that wolves populated the Ardennes landscape in olden times. Some say that these wolf-packs came from Slovenia, where the best hops in the world are cultivated... True story? In any case, the wolf was behind the creation of a new beer: Lupulus. The name derives from the Latin name of the hop plant Humulus Lupulus, which means Small Humble Wolf.