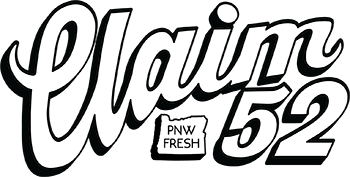 Founded in 2012, at Claim 52 Brewing we put a unique and inspired touch on every one of our small-batch brews. We pride ourselves on creating innovative beers that capture today’s evolving tastes that go beyond the hop-centric Northwest IPA. Our hazy, tropical-inspired brews and fruit-infused beers have won acclaim not just for their creativity, but for their taste, freshness and quality. We know beer lovers can get pretty attached to their favorites, so we make sure our lineup of brews includes some traditional Northwest-style IPAs, porters and other more familiar styles.

You can find us at two locations: Claim 52 Kitchen just south of downtown Eugene, and the Taproom, at our brewery on Tyinn Street just a mile west of the Kitchen. We also are on tap in select Northwest brewpubs and restaurants, and our distinctive 16-ounce four-packs are sold at various purveyors around the region.