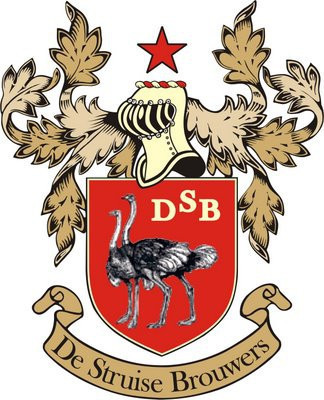 The “Struise” concept is based on creativity, innovation, quality, sustainability and friendship. We started developing beers anno 2001, at a holiday resort in the village of Lo-Reninge, in a small barn at an ostrich farm called “De Noordhoek”. The first beer we ever developed there, was an Old Style wheat-beer, called “Struise Witte”. The name “Struise” is taken from Flemish slang for ostrich. Our brewery coat of arms takes it a step further and features a proud ostrich amongst knight’s helmet, shield and feathers.
Back in 2003 we decided to go commercial with our latest creation, a Belgian Dark Strong Ale called “Pannepot”. Not with an own installation, for that we did not have the money yet, however, we proceeded as gipsy brewers. First at the Coulier Brewery and later at the nearby Deca Brewery in Woesten / Vleteren. In 2009, we moved to a school facility in the village of Oostvleteren, and where we’ve been brewing our beers independently since 2012.
Next