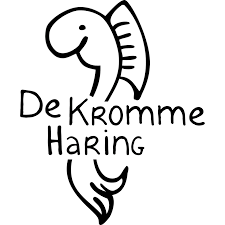 De Kromme Haring is all about surprising, well-made, delicious and drinkable beers. Biologist and homebrewer Stephen Grigg travelled from America via the UK to settle in the Netherlands as (homebrewery) De Kromme Haring. After meeting beer-afficionado Gijs van Wiechen, who invited him to brew the anniversary beer for infamous bar-dive Kafe Belgie, the two decided to "go pro" in 2014. After the first tentative, educational and sometimes frustrating steps in contractbrewing they quickly decided that they needed their own system and place to pursue their aproach to brewing. This cunning plan came to fruition when they opened their very own brewpub in september 2016, with the brewery installed in december 2016. With over 20 years of brewing experience, we have cultivated a deep love for English malts and American hops. However, we love yeast even more and believe that the quality of fermentation is at the core of all well-made beer. Knowing how to work with many different kinds of yeast, both "clean" and "wild", is what sets us apart. Our brewery and yeast lab allows us to experiment with lesser known and used yeast strains in our brewery. Part of our brewery is even dedicated to stainless steel fermenting with wild yeasts like Brettanomyces and/or blended cultures, creating surprising and delicious flavours.
Next