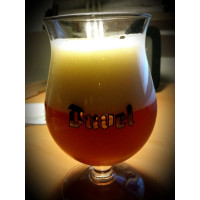 Rather small, but extremely well-sorted bottle shop near 'Vrijthof'. I thought I could go for some locals but the shop is all about high quality craft beer from all over the world. Lots of big beers available within an astonishingly large lambic section (Vigneronne, Hommage, Framboos etc.). Staff spoke English, not even Dutch, and you have to ask for every price as there are no tags (is this even allowed?), but even this takes up quite some time. Almost about half of the beers are stored in a fridge, mostly cans and hoppy stuff, of course. Great place to stock up on some top notch beers, definitely worth a detour.

Medium-sized restaurant which is located in an almost historic cellar of former town hall. I have already been there as a child but can't really remember the look of it. I also never visited 'Hopfen & Salz' in Dortmund. The Hagen location is a welcome alternative to the rather boring gastronomic offerings around, especially since it's focusing on beer. Well, they do have 26 taps, most of them are macro or close to it, the most exciting ones are a NEIPA from De Molen, an IPA by Brooklyn and a Pale Ale by BRLO. Fortunately, they offer a tasting tray of five 0.1 l glasses, beers can be chosen by the customer, the most expensive ones are excluded though. During my visit, the glasses for the trays weren't available though, but that's due to having opened just recently. This is much more than offered in any other place in Hagen. Food is decent, rather hearty and classic, but also with a few twists like beer jus or beer coating. Prices are just okay, staff still needs some time to get used to the beer menu I guess. A promising venue for sure, but still with room for improvement. I wonder if Hagen is ready for 26 taps, I hope so, but time will tell.

Weinhandel Häckel is a small store which mainly sells wine but also whisky and other spirits. Recently, it began stocking beer from local breweries. Right now, the assortment covers breweries like Ostermann, Hanno, Waldstadt, Norschibräu and Vormann, about 20 different bottles are available. Prices might be a little on the high side, but still reasonable. I can't say too much about the service as the shop owner wasn't available during my visit, just a temporary helper not really familiar with the cash register and the prices. By the way, there is a small parking lot right in front of the store. Nice place, definitely worth a visit if you're looking for beers from the area, since most of them can't be found in the regular bottle shops, especially not all of them at the same one.