Brewpub/restaurant with a modern industrial feel. The brewery is visible through glass walls as well as some equipment in the bar. There were 10 available beers on tap on my visit, all coming from the brewery itself. Worth a visit, especially as it is close to other good beer bars.

Visited on a rainy Thursday afternoon. Really cozy lunchroom / bar with lots of wood and decorations. Lots of outside light due to the windows on 2 sides. Lots of plants as well. Bar is located in the back, some stools at the bar, all the other seating are wooden tables and chairs. Nice 60's and 70's rock and soul music playing. They have around 70-80 beers, no big surprises here but they stock the full range of (available) Zeglis beers and serve as a taproom for them. All decent to good brews. They serve snacks and a meal too, didn't try any except for the bitterballen. Love these kind of places, so I'll be back soon.

Free wifi. Decent selection of craft beer but Tesco and Morrisons are better 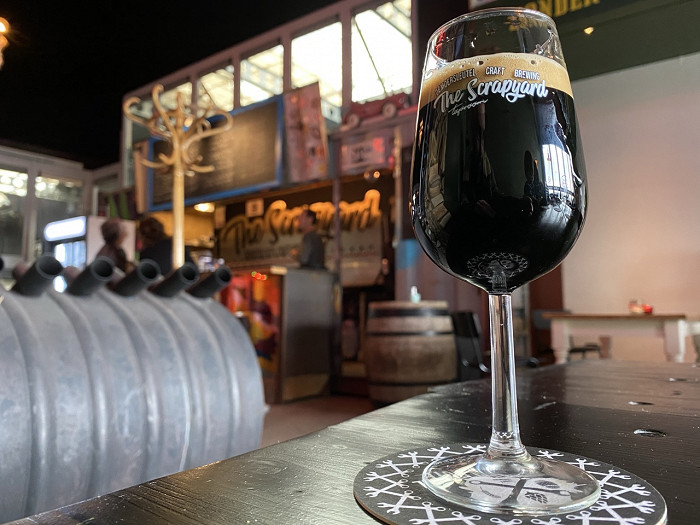 Kermis (1131) reviewed The Scrapyard 1 year ago

After more visits than I can count here I'm wondering to myself how come I haven't written any kind of review yet? Maybe because it seems to be in a constant state of change!

My first visit was on opening day, at opening time after going to a somewhat lacklustre Alkmaar Beer Festival with a friend who was visiting from Thailand. We left as soon as we could to get to Scrapyard at opening and discovered a shabby glass building in a run down lot which was clearly in a state of about to become an awesome new hangout the likes of which Alkmaar has never seen.

Back then it was just a pop up bar, a trial during the summer with a view to open the following summer if it was a success. When we arrived they were still drilling the POS system into the bar, but the taplist of 20 beers was already looking promising with a solid selection of Moersleutel including bar exclusives.

Things have moved on since. The old building is still there but no longer houses the bar, though it is still open on sunny days when the outside area is full of seats. The bar is now inside to the right and on my last visit has just opened up another room, with more space to follow.

The beer selection remains primarily Moersleutel, with plenty of rotation of new stuff. Some guests and occasional tap takeovers too, though I mostly just go for the Moersleutel.

Given that it's still damn covid time at the time of writing, it's also a place with plenty of space so that's a winner. Great service, great location and great beer. Really one of the top spots in the Randstad for me.

Visited on 29 Sep 2020 at 19:18
We use cookies to give you the best online experience. By continuing to browse the site you are agreeing to our use of cookies.